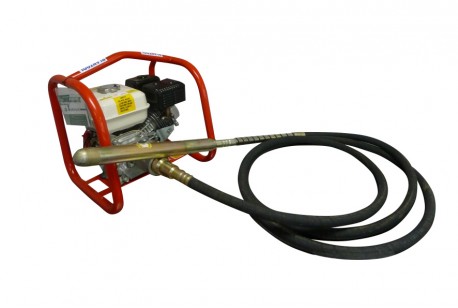 What is a Concrete Vibrating Poker?

We call them Concrete Vibrate Pokers but they are sometimes called “ Internal Vibrators”, “Internal Pokers” or “Needles”.  Whatever they are called or powered by, they all look fairly similar.

A cylindrical steel head that vibrates, this is attached to a flexible shaft or hose. The hose /shaft transmits the power to head and is used to lower and raise the head from freshly poured concrete. Typically the head diameters range from 25mm to 60mm.

The head contains a high energy vibrating mechanism working on a pendulum principle or with an eccentric, rotating weight.

How do Concrete Vibrating Pokers Work to remove Air from Concrete?

The vibrating action of the head causes the surrounding concrete to vibrate. As the aggregate and cement slurry of the concrete vibrates the mix becomes more fluid. This allows air that will have been trapped in concrete during the mixing process to form bubbles that then rise to surface, out of the concrete.

The correct way to use a vibrating poker will ensure the maximum compaction of concrete and minimum of trapped air. If used incorrectly a vibrating poker can add voids and weaken concrete so understanding the basic principles will help to achieve better results.

How deep to vibrate with a concrete poker?

The head should be lowered in to the concrete (not dropped) to a depth of:

In practice this means the depth of concrete should be no more than of 300 to 500mm. Deeper pours should be built up in layers.  If this is the case then each layer should be poured whilst the layer below is still workable and the poker head should be lowered in to the preceding layer by at around 100mm to ensure the layers form a homogeneous mass.

When vibrating the first layer the head should not rest against the bottom. Lifting the head slightly above the floor level will allow it free movement for more effective vibration.

If the poker head is immersed too deep then the concrete above the head will not get sufficient vibration so rising air will be trapped.  The effectiveness of the vibration will also be reduced as the depth increases.

How long to vibrate concrete?

The poker should be left in the concrete for a few seconds only.  It is impossible to be specific as there are so many variable factors including the poker power and size,  aggregate size and grading, concrete slump (sloppy or stiff), admixtures, proximity to and density of reinforcement, distance from formwork etc.  The operator should notice a circle of influence around the poker where the concrete is fluidised, through which air bubble rise and the surface level may drop.  After a few seconds the bubbles will stop and compaction is complete.

What distance between dips of the poker?

In reality it will be up to the operator to judge this distance with the poker he is using in the particular concrete mix. Too close together and he will be working inefficiently and with a small risk of over-vibrating some areas. Too far apart and areas will be under-vibrated.  The operator will also have to notice and compensate for the effects of vibration near form work and around different densities of reinforcement bar and mesh.

Selection of a higher power vibrating poker, larger diameter can make a big difference to the work rate on larger pours.

When is comes to the actual use of a poker on site the temptation is to take a few short cuts all of which may be detrimental to the quality of the concrete.  These examples are some of the practices to avoid:

Going too deep in walls, columns and foundations.  As well potentially trapping air bubbles above you can’t see the diameter of influence so you won’t know what is being vibrated.  These structures often have large concentrations of reinforcement this can divert the poker head so it might end up anywhere. In the worst cases the head can become trapped, the vibration will not be sufficient to keep the concrete fluidised adding to the difficulty of withdrawing the head.  There are many building and structures with pokers embedded inside, costly for the contractor with lost plant and even costlier if the the structure has to be broken up and re-cast.

Throwing the poker head.  Often seen done on wide foundations / footings as the operator is working from the side and understandably, not risking being too close to edges of excavations.  The head will enter and drop at one position and angle and exit at another.  So large air bubbles can form but not rise out. A method should be devised so the operator can safely lower and raise the poker vertically.

Dragging Pokers used for vibrating concrete slabs.  This is a tempting technique for operators  as large areas can be covered without having to constantly dip the head.  Again this technique can end up tapping air especially if the operator is dragging the head quickly.  If a poker is being used in conjunction with a vibrating screeding machine then problem trapped bubbles can be vibrated out in the second process.   In this case the technique can be valid if done slowly to ensure good compaction at the bottom of the slab where the influence of the screeding machine will be less.

It should be noted that pokers rely on immersion in the concrete for cooling.  So they should not be run “dry” for any extended periods, overheating will cause seizing of the head.

12 other products in the same category:

Thank you for submitting your booking enquiry. A member of Plantool staff will look to respond to you within 2 working hours.