How To - Preventing and removing airlocks in pipes

It’s not a happy day when you turn on your tap and no water comes out. If this happens, it’s usually because of an air lock. Sometimes air locks occur after a system had been emptied. Hot water heating systems and central heating systems are vulnerable to this. Plumbers can be expensive and this is one problem you might be able to easily fix yourself. 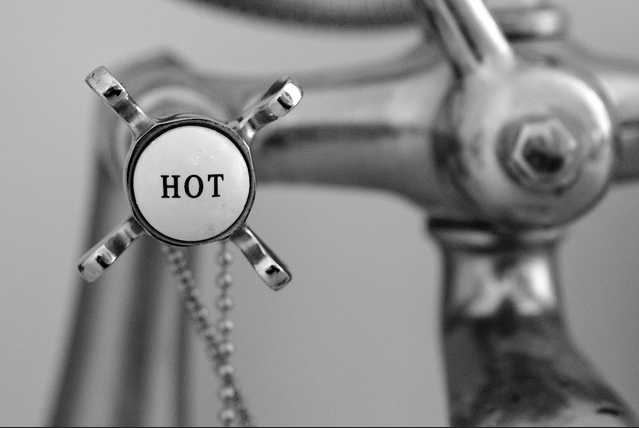 The tendency of air to rise can cause air bubbles to become trapped in the loops and curves of a pipe system. If the air bubble is big enough, it will cause a damn in that section of the system. Have you ever tried submerging something full of air? Take a float in a swimming pool, for instance. Made of air-filled polystyrene, it takes significant force to hold under the water. The same sort of force is resisting the water flow through your pipework.

There are measures that can be taken to prevent airlocks forming in the first place. Stopping leaks occurring and having adequate seals in place is desirable in any water system for correct operation, but minor issues like this with a closed system can lead to air getting in. If you are draining and refilling a system, extra care needs to be taken to prevent air getting in as you do this.

However, once the issue is there, here are some ways you might be able to fix it:

In the Hot Water System

One way to overcome a blockage in your hot water system is to attach a hosepipe to the offending tap, connecting the other end to a direct feed tap, like the cold tap in your kitchen. Turn on both taps and leave for a time - possibly several minutes – for the mains pressure to work on the blockage and hopefully push it through. When you are ready to turn the taps off, make sure you turn the blocked tap off first.

When you remove the hose, do so from the ‘higher’ of the two taps first, then when you release the lower tap, the water should simply drain from the hosepipe.

If connecting taps in this way doesn’t work, you may have to consider draining the system down. Turn of the water feed to the system, locating and turning off the stopcock, then turn on all the taps to drain the water out.

Now close all the taps most of the way and turn the water supply back on. Go around adjusting all the taps until they each have a (light, but) even flow through each tap. You now need to repeat this step another couple of times at least, turning the taps up slightly and then moving between them to ensure a balanced flow until the taps are about three quarters open.

If draining the system like this doesn’t solve the problem either, it’s probably time to call a plumber.

In a Heating System

Switch off the boiler, you do not want your system pump running while you are doing this. Turn off the upstairs radiators first and then bleed the radiators in turn, starting with the first one in the system. Open the flow valve and close the return valve, so that when you bleed the radiator, water from the flow will fill the space in the radiator. With the lockshield valves, record the number of turns taken to close each one, so that when you open them later, you will return them to their original position.

When you are finished bleeding the first radiator, close all valves – including, obviously, the bleed valve – and move on, repeating this process on all radiators in the system. When this is finished, go back to the first radiator and open the valves, moving through until all the radiators are open.

It maybe worth repeating the bleed process after a few days if you are still having issues, but if this still doesn’t work, it might be time to think about draining whole system or calling a plumber.